Francisco Herculano de Oliveira, Mestre Herculano, was born in Rio Grande do Norte, was registered in Ceará, and made the north of the country his home when he was still a young man. Today, on November 15th, 2018, he turns 83. He lives alongside the members of his family and the irmandade of the União do Vegetal with good humor, health, willingness to learn and teach, and countryside mannerisms that are peculiar to him. Whoever meets him never forgets him.

In homage to him, the UDV Blog is republishing the following excerpts from previous publications in celebration of his birth and invites everyone to re-watch the interview with him, produced by the DMC, from the “Mestres of the Origin” series. At the time that it was recorded, he was occupying the place of General Representative Mestre (2009–2015), the highest responsibility in the União do Vegetal.

And, as it could not go without saying, we are including one of Mestre Herculano’s characteristic sayings below, wishing for him that which he has always wished for all of the brothers and sisters of the UDV:

In 1971, the “caboclo” born in “the extremes” of Ceará with Rio Grande do Norte received in Porto Velho a star from the hands of Mestre José Gabriel da Costa, a man sent by God, as he himself says. His spiritual guide. The star, embroidered on a shirt, had not fallen from the sky. It was more like a seed planted in a fertilized heart, open for love. A plantation watered by the awareness of God’s truth with the doctrine and the practice of peace; a fine comprehension growing amid the harsh reality of the interior of the Amazon, the result of an example of Light that the caboclo knew how to see and feel even with eyes tightly shut.

The above text was written by Counselor Cristina da Luz (Núcleo Purpuramanta – Rio de Janeiro – RJ) and may be read in full by clicking here.

Having dedicated 50 years of his life to this Sacred Work, this good-humored and fast-thinking farmer emphasizes in his doctrine that simplicity and the practice of good living ought to be a way of life. Correspondingly, as a good grower, he teaches how to plant the seeds of peace and love in every heart with fertile soil and in the mind of those open to encountering the Savior.

The above text was written by Counselor Isabel Oliveira (Núcleo Jardim Florescendo, Gainesville, FL – USA), daughter of Mestre Herculano and of Counselor Ritinha, and may be read in full by clicking here.

See below the interview the Mestre Herculano, which is a part of the Mestres of the Origin Series: 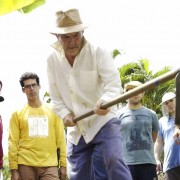 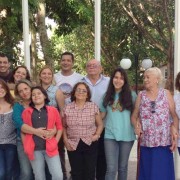