The Flag of the UDV – The Symbol of the União is Light, Peace and Love | Photo: DMC/SG 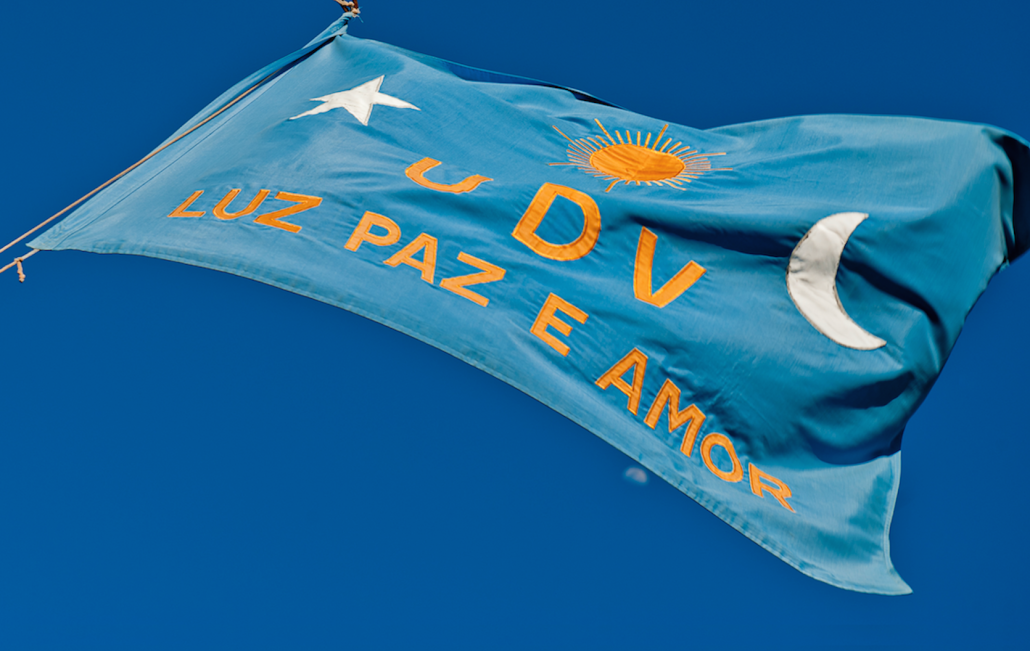 The Beneficent Spiritist Center União do Vegetal (UDV) is a religion with Christian and reincarnationist foundations. In its ritual, the UDV makes use of Hoasca, a tea prepared with two Amazonian plants, the Mariri vine (Banisteriopsis caapi) and the leaves of Chacrona, a small tree (Psicotria viridis). In the UDV, Hoasca Tea is also known as “Vegetal” and UDV members drink it during sessions for the effect of mental concentration.

The objective of the UDV is to contribute to the spiritual development of the human being and the improvement of intellectual abilities and moral virtues, without distinction of race, sex, creed, social class or nationality.

BORN OF THE FOREST

On July 22, 1961, deep in the Amazon Forest, José Gabriel da Costa (Mestre Gabriel) created the União do Vegetal with the objective of “bringing peace to the world,” as he himself said to his disciples. In that moment, Mestre Gabriel was accompanied by his wife, Raimunda Ferreira da Costa (Mestre Pequenina), their children and a few rubber tappers.

The UDV continued to develop in Porto Velho where Mestre Gabriel established and trained the leadership of the UDV: the Cadre of Mestres and the Body of Counsel of the União do Vegetal. After his passing in 1971, these founding Mestres of the Origin continued the work, expanding the UDV with the establishment of new UDV congregations (Núcleos) in cities in Brazil and other countries.

With the passing of time, Núcleos of the UDV were founded throughout Brazil. In 1982, the UDV’s General Headquarters (Sede Geral) was transferred to Brasília, and the expansion continued in Brazil and in other countries.

Since 1961, the UDV has continued to steadily and sustainably grow. In addition to the General Headquarters, the União do Vegetal now has 216 Nucleos and Distributions, located in every Brazilian state and several countries: the United States, Canada, Spain, Portugal, Switzerland, Holland, Australia, Italy and Peru. There are over 21,000 members and more than  6,000 children of members, comprising over 27,000 people. Among the current membership, there are five living Mestres of the Origin who lived and spent time with Mestre Gabriel, the founder of the UDV, and who today compose the Council of the Remembrance of the Teachings of Mestre Gabriel.