Members of the UDV participate in a scientific study of the Hoasca Tea (Manaus-AM) | DMD/Caupuri. 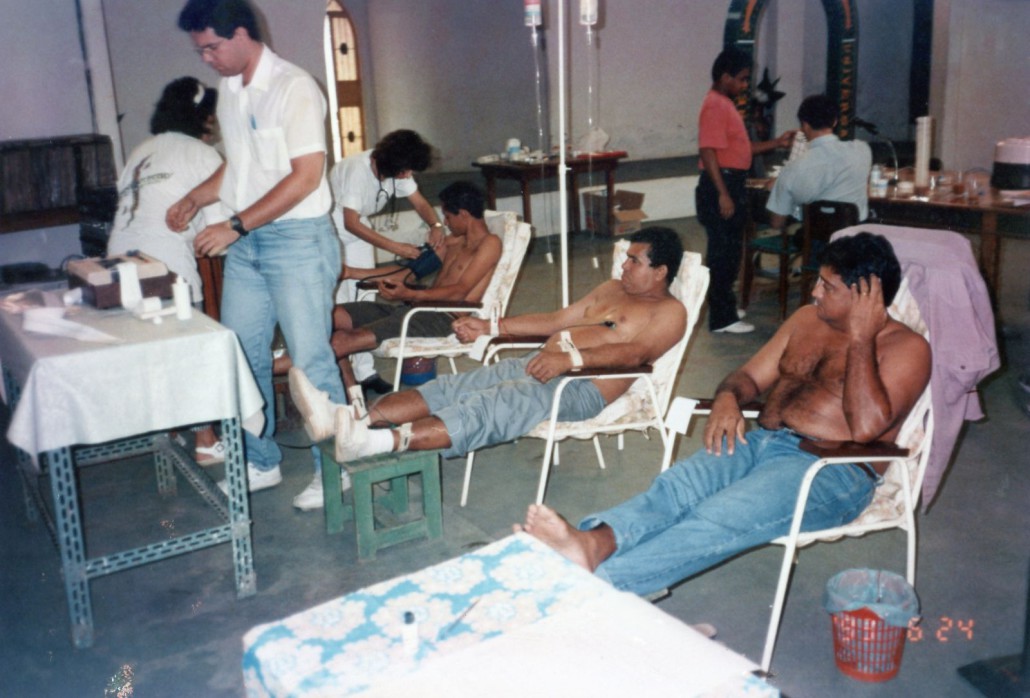 The Hoasca Project was the first study conducted to assess the long-term effects of the Hoasca Tea in human beings. From 1991 to 1996, the project consisted of a multinational cooperative effort involving researchers from nine universities and research institutions from Brazil, the United States and Finland. The study was financed by a non-profit North American institution. Ten research studies were realized under the title “Human Pharmacology of Hoasca: tea prepared from hallucinogenic plants used in ritual context in Brazil”.

“We discovered many things, but I find that the key issue is that Hoasca is in no contexts toxic or harmful to the human body, does not cause any neurological, cognitive or personality dysfunctions.” affirms the General coordinator of the Hoasca Project, Dennis McKenna, Ph.D.

This was “an intensive and exhaustive study, never before conducted, with respect to the medical aspects of Hoasca”, affirmed the principal investigator of the Hoasca Project, Charles Grob, M.D., of the Division of Psychiatry of the University of California L.A. (UCLA), U.S.A. Under his direction, the botanical, chemical and pharmacological aspects of the two plants (Mariri and Charcrona) and of the preparation, the Hoasca Tea, were analyzed. In addition, the sociological, psychological, medical and legal aspects of the use of the Hoasca tea were evaluated.

In The Hoasca Project, the interaction between the alkaloids contained in the two plants that compose the Hoasca Tea – the Mariri (Banisteriopsis caapi) and the Chacrona (Psychotria viridis) – and its effects on human perception were studied. The União do Vegetal provided specimens of mariri, chacrona and Vegetal, as the researchers needed. “We were thoroughly permitted, and even encouraged, to collect all the specimens that we requested and we were given responses to all the questions we asked, without objection. Nothing was omitted”, says neuroscientist Jace Callaway, M.D., member of the Department of Pharmacology and Toxicology of the University of Kupio, Finland.

“As scientists, we were completely astonished when we were invited to enter into the center of the mysteries of a religious group. It was unusual to imagine that a religion could be so confident, to the point of permitting a group of scientists to enter and to do what was useful for them to do and then exit without any preconditions.” admitted Jace Callaway. He believes that, if there were serious problems, “we would have seen signs of them immediately.”

To evaluate the people who drink Hoasca tea two groups were formed: the experimentation group with 15 Members who each had been drinking Hoasca tea in the União do Vegetal for more than ten years, and the control group, with 15 people that had comparable characteristics to the first group but that never had drank Hoasca Tea. According to the study, “evaluations administered to both groups included interviews for psychiatric diagnoses, personality tests and neuropsychological evaluations”. Among the people who drink Hoasca Tea, physiological reactions during the first hours of burracheira (the effect of the tea) were measured, including blood samples and neurological and cardiac monitoring, in addition to a complete physical examination.

The scientists accepted the invitation of Mestre Florêncio Siqueira de Carvalho, responsible at the time for Núcleo Caupuri, in Manaus, state of Amazonas, and conducted the data collection phase during the summer of 1993. Mestre Florêncio was one of the volunteers and later declared, “the results gave me more conviction of what the União do Vegetal is”.

HARMLESS TO THOSE WHO DRINK IT

In the psychological aspect, The Hoasca Project reports that “there was no evidence of cognitive deterioration or deterioration of the personality for the people who drink Hoasca,” and also that “it is not unthinkable that long term use of Hoasca can have positive and therapeutic effects on the psychiatric and functional status of individuals”. With respect to the pattern of use and the relationship of the Tea drinkers with the Tea, the report concludes “there is no pattern of dependency, abuse, overdose or abstinence.” Also, there were no observations of mental disturbances subsequent to drinking the Tea.