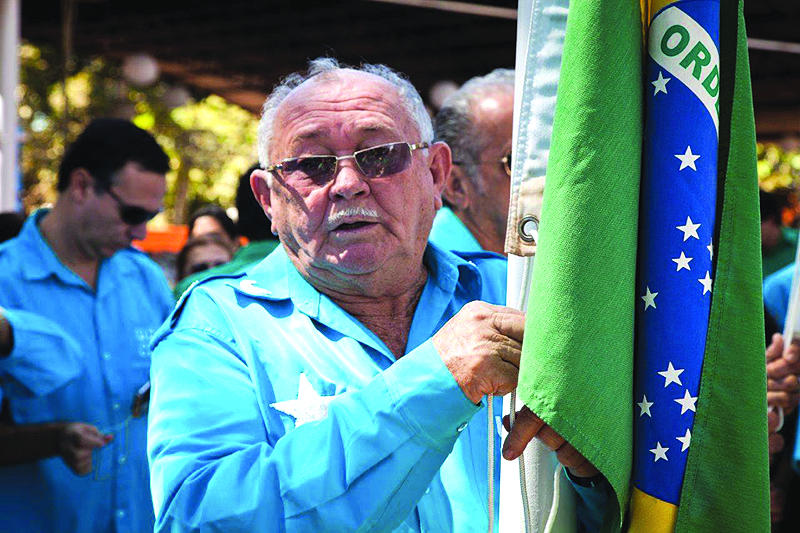 Mestre Herculano is turning 80 years old on November 15th, 2015. To describe him – asking my thoughts to be faithful – images arrive of the forest that received him as a rubber tapper at that time in the Territory of Guaporé. The force of a large tree, with strong roots in the midst of many other trees, the health of the sap that nourishes it and keeps it standing, the fresh water source, the fraternal welcome of the defined shadow, the fruits that the integrity of Nature guarantees, that are born in the place that they belong.

In 1971, the cabolco born in “the extremes” of Ceará with Rio Grande do Norte received in Porto Velho a star from the hands of Mestre José Gabriel da Costa, a man sent by God, as he himself says. His spiritual guide. The star, embroidered on a shirt, had not fallen from the sky. It was more like a seed planted in a fertilized heart, open for love. A plantation watered by the awareness of God’s truth with the doctrine and the practice of peace; a fine comprehension growing amid the harsh reality of the interior of the Amazon, the result of an example of Light that the caboclo knew how to see and feel even with eyes tightly shut.

Whoever knows Mestre Francisco Herculano personally doesn’t need an interpreter, someone to explain how he is or what he means to say. It’s hard not to like him. Neither tall nor short, neither very quiet or very talkative, he is all Northeastern caboclo, descendant of many races, wise, almost clairvoyant, and with unbelievable insight (a word that he will not like). A timeless smile.

His work in the back country since childhood has remained present in his simple appearance. The harshness of life has remained present through his learning and understanding with his feet on the ground. Religion in his family brought values, clear observation, and part of an education that didn’t come from studying books, but rather from intelligence that perceives with competence, that ponders, that examines, and doesn’t speak out hastily – only out of necessity. Almost always surprising the listener.

The marriage to his beloved Ritinha brought a family. This wife and companion, Ritinha, turns 67 years old the day after Mestre Herculano, on November 16th. One more reason to celebrate the art of living well. Family conviviality in the União do Vegetal, a higher land for cultivation, yielded many many fruits, and the practice of values that Mestre Herculano always highlights as two pillars in his doctrinal explanations: morality and good manners. Morality in the practice of the fulfillment of Mestre Gabriel’s words of guidance and orientation; good manners among brothers and sisters.

He is in the first historic photos taken during the origins of the UDV, the majority captured by Mestre Cícero, who completed his mission of showing the faces of those valuable guardians of recordation.  He is next to Mestre Gabriel in the sessions, work parties, at the preparations of Vegetal in the brick factory, and in the first works.

The old discreet prospector was also reaping the historic gold of victory on the floor of the House of Representatives, dressed in a blazer, when the União do Vegetal was recognized and honored for its 50th Anniversary in the National Congress. Mestre Herculano was the General Representative of the Beneficent Spiritist Center União do Vegetal from January 6th, 2009 to January 6th, 2015, a period during which he dedicated even more time and heart to the brotherhood and the institution. Elected, he settled in the city of Brasilia until returning to Porto Velho at the beginning of this year.

His natural discretion cannot avoid, however, the forest of stories born of a clear and quick thinking. Mestre Chico Herculano unites the fame of being a tamer of wild horses with the ability to respond to difficult questions, and thus gives us the chance to admire and laugh at some of the wittiest responses between Mestres and disciples, while at the same time those responses being wise and light are repeated with warmth and joy by the members of the UDV.

One time an associate asked in a session what she could do to orient and serve her children. In the blink of an eye (his are always fast), he replied: “Ma’am, have you ever ridden on a airplane? First, don’t you have to place the mask on yourself and then on the child? Certainly…for us to educate our children we have to care for ourselves first…”

The most surprising dialogues are on the list of conversations by Mestre Herculano. An associate brought a German psychiatrist to his [M. Herculano’s] home, a man considered one of the world’s highest authorities in that field. Having just returned from a trip, Mestre Herculano was laying down after lunch. Ritinha advised, and the guests waited. The brother who had arranged he meeting became embarrassed, worried about the punctual German culture of the distinguished guest. After a while, Mestre Herculano appeared, and with the simplicity of always, talked and doctrinated. He doctrinated alot, and looked in the eyes of the authority in psychiatry.

After some time, more concerned with how the invited guest had received the impact of the doctrine, the brother that had arranged the meeting thanked the attention of the General Representative Mestre, and took the psychiatrist to the next scheduled event. A bit embarrassed, he asked what he had thought about Francisco Herculano, of whom he had spoken so well without knowing how the conversation would go. The psychiatrist, thoughtful and impressed, gave his verdict: he is the best psychiatrist that I have ever met!

May the seed of the star planted in the pacific heart of that dear friend, an important person in our religion, faithful guardian of the doctrine of Mestre Gabriel, shine ever more in his wide, seeded heart surrounded by flowers. Francisco Herculano de Oliveira, Mestre Herculano, Happy Birthday! 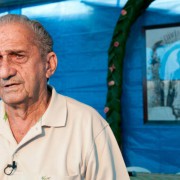 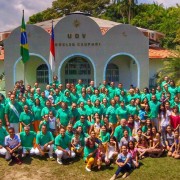 In Manaus, the First Núcleo of the UDV
Scroll to top