Agroforestry course had the participation of 50 associates from the 4th Region of the UDV | Photo: Felippe Thomaz 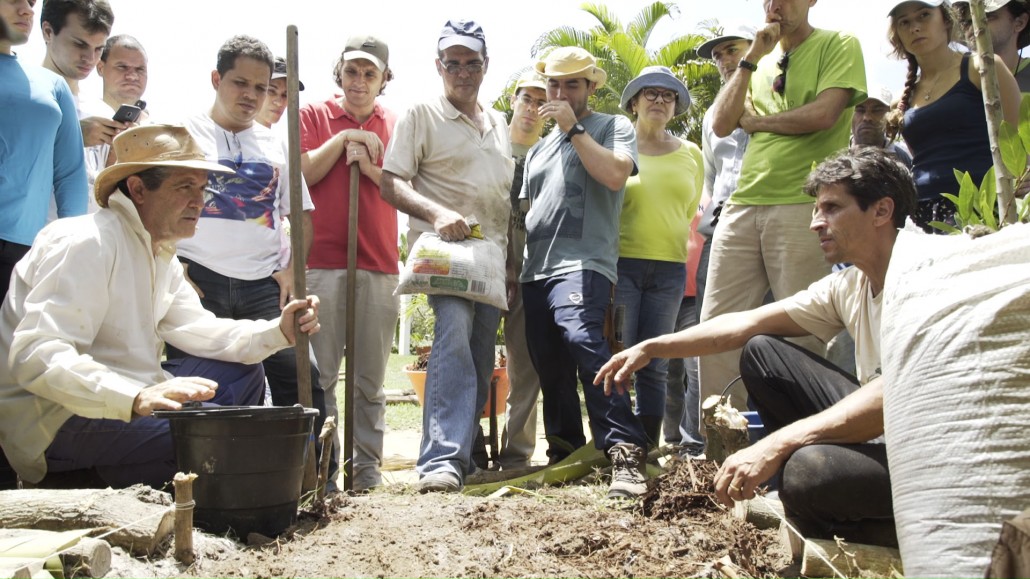 Since 2010, at the First Plantation Congress held in Manaus-AM, the Beneficent Spiritist Center União do Vegetal has been encouraging the adoption of agroforestry techniques within its Núcleos, in the plantation activities of Mariri and Chacrona. Many Núcleos are also undertaking cultivation courses in agroforestry systems, an initiative of the Department of Plantation and Environment, together with the Novo Encanto Association of Ecological Development.

The most recent was held at Núcleo Serenita (Lauro de Freitas, Bahia), between September 29th and October 1st, and brought together 50 participants from the 4th Region (Bahia and Sergipe), who learned the principles of syntropic agriculture and agroforestry. The course was taught by the agriculturist André Pellicano, who works with agroforestry systems, and by the Master in Ecology from the Federal University of Brasília, Marcio Armando, both affiliated to Núcleo Canário Verde (Brasília-DF, 8th Region).

The techniques of syntropic agriculture and planting in agroforestry systems were disseminated in Brazil by the Swiss Ernst Gotsch. With more than 40 years of practice, Gotsch has developed an agricultural practice that reconciles agricultural production with the recovery of degraded areas, in processes that use natural regeneration and the search for balance, characteristic of all life on the planet.

“It is a technique that does not deplete the soil because it uses resources that revitalize it, like, for example, the pruning of trees, which creates an organic cover”, clarifies Marcio Armando. According to him, agroforestry is the best way to grow Mariri and Chacrona because it is in this ecosystem that these plants reach the best conditions of development.

“We make a kind of forest garden,” explains André Pellicano, who coordinated the cultivation of an agroforest in Núcleo Serenita, including planting trees like mahogany and rubber trees, alongside jambo, watermelon, pumpkin, guava, papaya, along with a small plantation of beans, yuca, and corn. All this along a land of 150 meters, where Mariri and Chacrona were also planted.

“Each Núcleo has its own particularities. Some already have a forest, in which we can already enter with the work of planting. Others have only land, which doesn’t even have grass. Then we have to plan a different plantation,” says Pellicano.

For the participants, the course was like a new literacy, through nature. “It motivated a movement in the way of seeing the environment, and which applies to day to day life, in our way of thinking about choices and in observing nature,” says Aline Proença, an associate of Núcleo Serenita.

“Everything happened with fluidity, which is a characteristic of nature. Sometime later, we will see the development of this mini-forest here in the Núcleo which will provide us with food and which will strengthen our sacred plants”, declares Izabela Duarte, also affiliated with Serenita.

“The technology of the plantation already exists: nature. She is the perfect system. Therefore, we have to learn to use this system, planting Chacrona, Mariri, trees and food,” says Eric Lassman (Núcleo Principe Teceu, Planaltina-DF), who already works with syntropic agriculture and who also participated in the course.

The question of food was also highlighted by Sandra Burgos, the Coordinator of Novo Encanto in the 4th Region. “It is not only the improvement of Mariri and Chacrona, but also the quality of the food we consume. It is a way of uniting quality of life with the preservation of the environment,” she adds.

For the monitor of the Department of Plantation and Environment at Núcleo Serenita, Eliezer Andrade, this is just the beginning of a long and exciting process of learning about agroforestry. “We need to increasingly raise awareness and realize that we still have a lot to learn about regarding how to plant and about what nature is telling us,” he concludes.