The consolidation of the works in Porto Velho

Mestre Gabriel and his family arrived in Porto Velho on New Year’s Eve between 1964 and 1965. With the beginning of a new Sun cycle, a new phase also began for the family and for the UDV, a religion that he had created while still in the forest, on July 22, 1961.

After barely surviving with the few financial reserves he had saved and without finding work in the city, they began to experience difficulties, to the point that the family considered returning to the rubber plantations. Upon learning of their intentions, two of his disciples, Hilton and Ramos, who would later be among the first Mestres trained, ask that the family not go back. To make him be able to stay, they said that they, together with some friends, would acquire a piece of land for Mestre Gabriel to build a brickyard.

Mestre Gabriel accepts, under the condition that he would work to pay back the land, and that is what he did. After seeing that the brickyard wasn’t earning a good profit because too much money was spent shipping the product to clients, the friends organized themselves and offered a truck, which was accepted under the same conditions of paying it back with the fruits of his [Mestre Gabriel’s] labor. Throughout his life in Porto Velho, Gabriel earned a living off of the income earned with the brickyard and the truck, which he also used to haul freight. He even managed to hire some of his friends from the rubber-tapping days, like Bacurau and Pernambuco.

Another activity that he worked on during this period was as a member of the brick maker’s union, which he helped to form, whereby he organized production, sales and market competition, which benefited all the workers of the region.

Although he reached the point of having 198 members, Mestre Gabriel always fought for his livelihood, not accepting any kind of advantage. The monthly dues charged to the members was solely and exclusively to offset the expenses of maintaining the works of the União do Vegetal.

Honor for his work

Everything he needed, even if it was a service provided by a friend, Mestre Gabriel insisted on paying for, going so far as to stop going to the office of a dentist who was his disciple because the dentist didn’t want to charge him. He honored his work as a way of supporting his family and equally valued the work of others.

A neighbor of the family became a widow, with 5 children to care for. Mestre Gabriel’s daughter, Jandira, saw her crying because she couldn’t buy food and told her father, who from then on began to have food delivered to her house every month, asking the store owner to not reveal that he was the one paying for it. From then on, when he would leave for work he’d say: “My God, make my business prosper for my family and for that widow.”

On the land where he lived, in addition to there being a house where he resided, there was another attached structure, which was ceded for having Sessions. But, aware of the importance of studying and wanting to benefit the children of the neighborhood, he also offered up the space to run a school during the day.

When he was being treated at the hospital in Messejana (CE), he treated doctors, workers and patients in such a friendly and loving way that he was elected representative of the Community Council.

Farmer, merchant, trolley conductor, rubber tapper, clerk, nurse, driver, brickmaker, Mestre Gabriel carried out all of these professions in order to earn his daily bread and support his family throughout his journey on this earth, while also helping the brothers and sisters. But what gave him the most arduous work was creating the UDV.

His brother Antônio asked him why he insisted on this religion and Mestre Gabriel said it was the best way that he had found to take the evil out of the human heart. This is his greatest and most noble work: teaching his brothers and sisters to live fraternally and thus promoting peace in the world. For this work, God gave him the gifts he needed, and the mission was accomplished with distinction, bestowing upon us a religion that – from the heart of the Amazon Rainforest – has circulated the world, bringing together people from different professions and with different levels of education, uniting everyone under the mantle of this symbol that has always guided him: Light, Peace and Love. 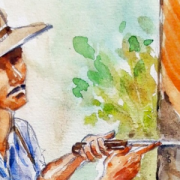 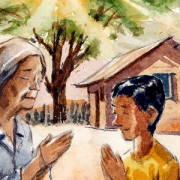 The Heart of sertão
Scroll to top