The struggle in the forest

After smuggling 70,000 rubber seeds from the Amazon, England started planting extensively in Malaysia. After the outbreak of World War II, Japan blocked the British rubber route and the Allies turned to Brazil, which, through an agreement with the United States, signed a commitment to triple production, which made the government mobilize its recruitment of volunteers, reaching the point of enlisting about 54,000 people, the so-called “rubber-tapper soldiers”.

The ships filled with volunteers that docked at the ports were similar to the ships that had once been loaded with slaves. As soon as they arrived, the bosses were there to choose them based on their appearance and their teeth and from there they were taken to the rubber plantations. There was no training, just a “kit” they were given, which had some tools in it. To survive the forest, they needed a good deal of willingness for hard work and, above all, courage.

His work with rubber began at Seringal Bom Futuro, where his first job was at a trading post. As he recounted in a letter to his mother, he was later assigned along with a cousin to open trails for rubber tappers so that they could do their extraction. However, there were cannibalistic Indians in the region and the two were captured. Only Gabriel escaped.

At Seringal Triunfo, he went to work as a book keeper, the one who recorded the production totals, and there he met a young man named Mário, who worked as a mule-driver, and they became so close that they signed a “pact of eternal friendship”. His friend contracted beribéri (an illness that affects the nervous system) and soon became incapacitated. When he learned that they were going to kill Mário, because he was no longer able to work, Gabriel went into the forest with him, carrying him on his back for 15 days, until he realized he was dead and then buried him.

After contracting an infection caused by a tick bite, he had to be admitted to the São José Hospital, in Porto Velho. There, he practiced giving injections using oranges. He became skilled in the role and, also because of his good treatment of people, some time later he would return to the hospital to work as a nurse, although he possessed the skills only, without having the training that is required today. It was in this job that he met Pequenina (Raimunda Ferreira da Costa), who would become his wife and companion, and with her he would carry out his greatest and most noble work, creating the UDV.

During this stay in Porto Velho, in addition to being a nurse, he supplied wood for the railroad.

After being let go from the hospital for political reasons, as he supported the candidate from Rondônia who was an opponent of the designated governor, he began a phase with several back and forth trips between the rubber plantations and life in Porto Velho. During the periods when he lived with his family in Porto Velho, he was also a business owner, living as a merchant.

In the rubber plantations, it should also be noted, that he helped people in different ways, including with the entities he received in the works of Umbanda, where he presented himself Sultão das Matas (Sultan of the Forest), Troveseiro, Flor da Aurora, Caboclinho da Mata and Tomba Morro. It is also said that he observed people and made stories in verses, printing them out as pamphlets when he went to the city to distribute to his friends and, thus, amuse them and make them forget a little about the hardships of everyday life.

In 1959, Gabriel meets a man named Chico Lourenço, that eventually gives him the Treasure that he had so persistently sought after, the Vegetal. That same year and after some sessions in the presence of Chico Lourenço, Gabriel began to prepare the Hoasca Tea and lead the works himself, thus beginning the exercise of his main role, as a Mestre, to teach and guide people on the path of good.

In December 1964, the period of life in the rubber plantations came to an end. Porto Velho, which had previously been his port of arrival, would then serve as the starting point for the message of peace and fraternity which would be taken to the four corners of the world. 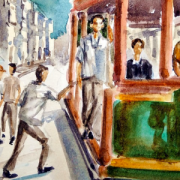 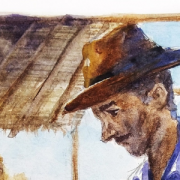