The Beneficent Spiritist Center União do Vegetal (UDV), a religious society created by José Gabriel da Costa (Mestre Gabriel in 1961, in the heart of the Amazon rainforest, with the objective of working for Peace in the world, uses Hoasca Tea (also known as Ayahuasca) as the Sacrament in their religious ceremonies (Sessions of the Vegetal), which are devoted to the study of spirituality, replacing within the human being the divine dimension of Nature and offering him the opportunity of spiritual reconnection with the Sacred through the development of moral, intellectual and spiritual virtues.

Created in an environment of simplicity, the UDV gradually expanded to urban centers and, starting in the 90’s, reached other countries, taking its simple and universal teachings of love of our neighbor and the unbiased practice of good, with no commercial purpose or profit, respecting its own origin, as well as local culture and differences in the countries where it arrives.

Currently, people of 47 nationalities are following the União do Vegetal. There are more than 21,000 members in approximately 220 headquarters in Brazil and in ten countries in the Americas, Europe and Oceania, with the knowledge and consent of the competent, administrative and sanitary authorities, and there is no record of any incident or occurrence.

Since then, the UDV has been firmly active in defending the fundamental right to freedom of religion, in order to ensure the free and full exercise of their religious belief and worship to all its members.

In Brazil, in not so distant moments, this freedom was put to the test when, in 1985, the National Division of Sanitary Surveillance of Medications (DIMED), an agency of the Federal Government, through an Ordinance and without any previous study, listed among the prohibited substances the Mariri vine and any substance obtained from it, including the Hoasca Tea.

The União do Vegetal, acting in defense of the rights of its affiliates, immediately took the initiative to request the Federal Council of Narcotics (CONFEN) to revise the prohibitive Ordinance since there was no study proving that Hoasca Tea was harmful to the health of the people who commune it. In fact, the evidence was (and is) in the sense that it is beneficial to physical and mental health, which is evidenced when used in a responsible religious context.

With this UDV initiative, the ban was suspended, and the Center also systematically joined the National Drug Policy Council (CONAD, which succeeded CONFEN in 1998). The UDV then had an important role in the new and more complete regulation of the religious use of Hoasca Tea, through Resolution 1/2010.

The recognition of the right to religious use of Hoasca Tea is based not only on the Federal Constitution, which guarantees everyone the right to exercise freedom of religion, but also Law 11.343/2006, which recognizes the right to planting, harvesting and exploitation of plants and substrates of strictly ritualistic-religious plants, in compliance with the 1971 Vienna Convention on Psychotropic Substances.

At the international level, in addition to this Convention, the International Narcotics Control Board (INCB), a body linked to the United Nations (UN), has stated lin writing that Hoasca Tea (Ayahuasca) and the plant species that compose it are not subject to international control. In the same line, a recent and important document of the United Nations was published in March 2019, containing International Guidelines on Human Rights and Drug Policies, which expressly recommends respect for freedom of thought, conscience and religion, including when such manifestations involve the use of psychoactive substances for religious or spiritual purposes in rituals and ceremonies (International Guidelines on Human Rights and Drug Policy).

In upholding this right, which is also based on the Universal Declaration of Human Rights, the UDV filed a lawsuit against the US Government and won in all instances, including the Supreme Court, which unanimously acknowledged the obvious: União do Vegetal is a sincere religion and its affiliates are entitled to the religious use of the Hoasca Tea (Gonzales v. The Charitable Spiritist Center União do Vegetal 546 US 418 -2006).

Today, UDV has a good relationship with Brazilian and US authorities, which authorize the regular importation of Hoasca Tea, complying with sanitary and transportation safety standards, all under the supervision of the government, and within the law.

Although, in Brazil, this right is already expressly recognized through CONAD Resolution No. 1/2010, the recent publication of Decree 9.759, of April 11, 2019, generated the fear of extinction of CONAD and the Resolutions approved by it that regulate the use of Hoasca in Brazil.

However, it should be clarified that the National Drug Policy Council (CONAD) is the central body of the National System of Public Policies on Drugs, and its guidelines and standards are principles of mandatory compliance, as provided by law (Law 11.343/2006). That is, even if it were extinguished, its norms and guidelines would not be automatically repealed, remaining fully in force and producing their regular effects.

The União do Vegetal accompanies the edition of Decree that promotes the administrative reorganization of collegiate organs of the government and considers that the subsequent edition of Decree 9.761 (after Decree 9.759), which approved a new National Policy on Drugs, clearly signals the permanence of the National Council (CONAD) in the structure of the respective National System of Public Policy on Drugs.

Remaining the CONAD, or another body that comes to assume its attributes, is expected to continue public policies aimed at promoting respect for citizenship, human rights, including religious freedom and tolerance of all creeds, notably when so many years have passed since the first regulation without any known social damage in the context of the responsible use of Hoasca Tea.

In this way, the fundamental right to religious ritual use of Hoasca continues to be assured, in accordance with the aforementioned norms, and the União do Vegetal remains vigilant and alert in the defense of this Sacred Sacrament and its responsible use, which it brings so much good to people, work for a universal fraternity.

*Carlos Teodoro Irigaray is General Assistant Mestre of the Beneficent Spiritist Center União do Vegetal.
**Náiber Pontes de Almeida is Member of the Body of Counsel of the General Headquarters (Brasília-DF).

Why did the UDV decide to implant agroforestry systems? 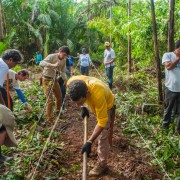