Why did the UDV decide to implant agroforestry systems?

Instructor orienting the implementation of a demonstrative unity of SAF | Picture: Tendy Saar. 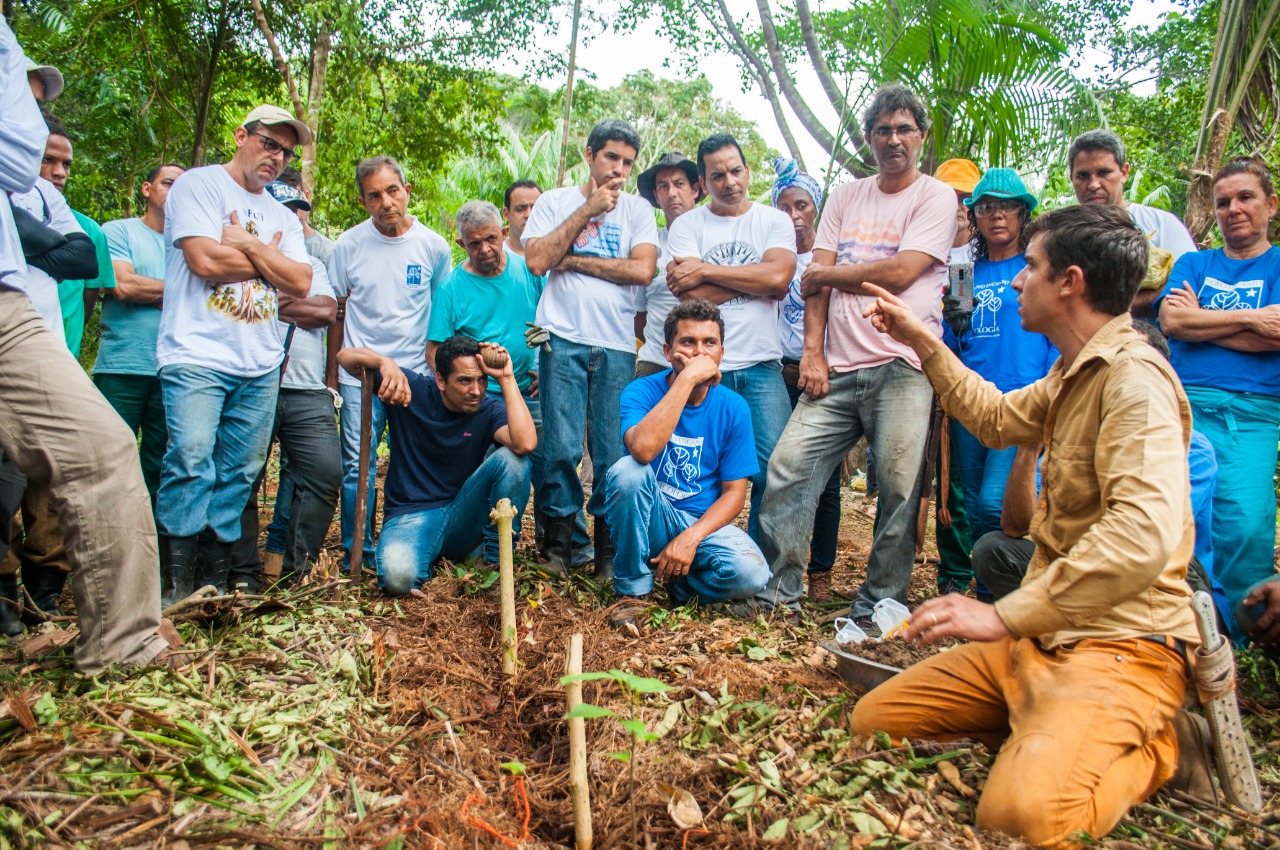 Some years ago, the Department of Plantation and Environment (DPMA) of the Beneficent Spiritist Center União do Vegetal noticed that the way to cultivate our sacred plants needed better quality and a closer approach to their original system in nature; the forestry system.

Some associates of the UDV, connected with the plantation work, started studying the agroforestry system (SAF), which associates agriculture production with the plantation of forest species. This system reproduced the way nature acts in the forest, with soil always covered with vegetation, and the plants helping one another, this way avoiding the occurrence of “pests” and “diseases”, that many times occur in monoculture systems.

In the places where this system is implemented, biodiversity grows, allowing a greater quantity and quality of life, brought by the dynamic cycling of organic materials. This allows more nutrients and life in the soil and, consequentially, more health and vitality to plants, and the entire biological system.

Some successful experiences of implementation of this system of cultivation of Mariri and Chacrona made the DPMA decide to utilize it in the work of planting in the União do Vegetal. It was concluded that the SAF is the best and most viable model, because it permits the development of Mariri, Chacrona and also of wood species in an environment that reproduces the original ecosystem of our sacred plants.

The system also brings an advantage which is the production of agricultural species: medicinal plants, hardwood, vegetables, flowers, fruit trees and anything more that we would like to produce in our plantations, being almost infinite the possibilities of cultivation of consortiums.

In agroforestry, the agricultural production is all organic, free from the use of agrochemicals and poisons. Currently, while the agroindustry invests even more in models of production that have already been shown to be detrimental to the ecosystem, it is of fundamental importance to amplify knowledge that promotes food security united with the preservation of nature.

Another great advantage generated by the dynamic of the plantation in agroforestry systems is to allow associates, in the Núcleos of the União do Vegetal, a closer look at the values that are characteristics of our religion, for example, the connection with the environment.

The management of agroforestry systems facilitate the development of the observation of natural processes. One can perceive how the movements of succession and stratification of plants function, the transformation of soil, the regulation of microclimate, and all of this awakes a larger consciousness of the sacred that exists in nature.

The project of implementation of SAF

In 2015, when Mestre Clovis Cavalieri arrived to the place of General Representative Mestre of the UDV, the Department of Plantation and Environment went through a general restructuring. An Internal Regiment was elaborated and 11 guiding principles were defined for the work of the DPMA. One of these principles is exactly to maintain a practice of agroforestry system, considering the diversity of species.

With the arrival of Mestre Paulo Afonso to the place of General Representative Mestre, on January 6th 2018, he solicited the DPMA to elaborate a project of implementation of agroforestry systems in the Plantations of the UDV. The project was elaborated with many hands and in September of 2018, it was approved by the Manager Committee of the General Directorate and by the Counsel of General Administration (Conage).

Thanks to the resources from the Faixa Adicional (funds constituted by volunteer contributions of associates), the first phase of the project (2019-2020) started to be implemented. We will go through the plantation locations of the União do Vegetal, and implement 17 demonstrative units of agroforestry, allowing the necessary learning for the plantation teams, and leaving models that will be replicated in the Núcleos of each region.

In all, the project counts with a team of 4 coordinators and 14 instructors. The foreseen time for the execution of the project is of ten years. The goal is that, in a near future, we will have in all Núcleos of the União do Vegetal, units of agroforestry that, beyond allowing more health and development of our sacred plants, can produce food and natural resources that contribute with the preservation of the environment.

REGIONS WHERE A DEMOSTRATIVE UNIT IS ALREADY IMPLEMENTED: 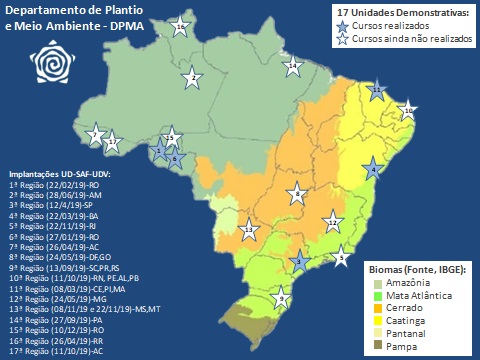 TEAMS OF THE AGROFORESTRY PROJECT IN THE PLANTATIONS OF THE UDV

*Mauro Carneiro Filho is Representative Mestre of Núcleo Flor Divina (Fortaleza-CE), Adjunct Director of the Department of Plantation and Environment and General Coordinator of Agroforestry Project in the Plantations of the UDV.

The alleged extinction of CONAD and the fundamental right for the religious...
Scroll to top