To celebrate the 60th year since the creation of the União do Vegetal, which will be celebrated on July 22, 2021, the General Directorate of the Beneficent Spiritist Center União do Vegetal released a commemorative logo. The logo was created by Cícero Sebastião Cosmo da Silva, winner of the contest that was internally promoted. Cícero is a member of the Cadre of Associates of Núcleo Mestre Raimundo Nonato da Silva, located in the city of Crato-CE.

The logo was announced on October 13th and began being used in the Center’s internal and external communications. It highlights the silhouette of José Gabriel da Costa, Mestre Gabriel, creator of the União do Vegetal, and is adorned by the number 60 and by a sphere representing the Earthly globe. The logo has four different versions and utilizes the colors blue, green, yellow and white. There is also a black and white version for when it’s not possible to use a version of the logo in color.

Below, the winning logo from contest: 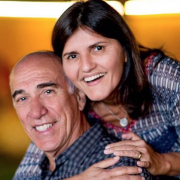