Hoasca as a theme of research and publications: the role of the UDV

União do Vegetal carried out and supported researches, in order to confirm the word of the Master Gabriel that “Vegetable is harmless to health” | DMC / General Headquarters.

Since its creation in the seringal of the Amazon Rainforest, witnessed by a small group of people in an environment of simplicity, the União do Vegetal has grown and spread to the principal urban centers of Brazil, and also to other countries.

In its expansion, the Beneficent Spiritist Center União do Vegetal had to stand up to prejudice and intolerance, fighting battles to ensure the right to the religious use of the Hoasca Tea, as it’s Sacrament, and to guarantee its recognition by Brazilian authorities as a public utility which plays an important role in the moral, intellectual and spiritual development of its members.

To assure that these victories concretize, the Medical Scientific Department of the Center (DEMEC), in partnership with diverse national and international academic organizations, realized and supported research, to confirm the word of Mestre Gabriel, who always affirmed: the Vegetal (which we also call the Hoasca Tea) is inoffensive to health.

Science endorsed the wisdom of the caboclo, and the scientific proof of what was already empirically known was instrumental in preventing governments from using false arguments of “public health” as justification for limiting constitutional right to religious freedom.

The fact is that this still small, caboclo religious institution (today with around 20,000 associates), which has always remained discrete, exerted an international role to deter prejudice and to assure the right to the ritualistic use of the Hoasca Tea. An example of this is the unanimous victory in the Supreme Court of the United States, which guaranteed the Center the right of the use of the Hoasca Tea in its sessions in that country.

The option for discretion continues existing, in the sense that the União do Vegetal doesn’t prosthelytize or advertise the beneficial effects of the Vegetal, and even less so does it campaign to recruit new associates; the best “advertisement” of the UDV continues to be the conduct of its associates.

However, with regard to the posture of being reserved from media exposure, the Directorate of the Center made a clear choice to occupy the space that belongs to the largest hoasqueira-entity (those who drink the Hoasca Tea) existing in Brazil and abroad, giving greater emphasis to communication, to show that, far from being a problem, it is part of the solution to the socio-environmental issues of the present day and to the civilizational crisis that humanity is undergoing.

In this task, academics, researchers, and scientists who are also members of the UDV have given their contribution. Studying, registering, and spreading information about the religious use of Hoasca in the context of the União do Vegetal, in its multiple interfaces and dimensions, as cultural heritage, of historical, ecological, anthropological and social value. It’s important, however, that these researchers, members of the UDV, strive to continuously amplify their leading role in scientific studies about Hoasca.

Recent events, which have taken place both in Brazil and internationally, have revealed that Hoasca is awakening more and more an international interest. Notable also in relation to these events, is the fact that many researchers, with little knowledge and experience on the subject, write and publish articles that are being used as references in other studies.

Not that this constitutes a problem. However, the more studies that we have conducted, above all, by researchers with more experience and dominion in the theme, the more scientific knowledge we will be able to obtain in respect to the use of the Hoasca Tea in its more diverse aspects (chemical, pharmaceutical, anthropological, social, among many others).

In this sense, the participation of UDV associates is very important in the conduction of these studies. In the Center, there are many botanists, ecologists, historians, jurists, researchers and scientists from the most diverse areas who can and should contribute to the recognition of the use of Hoasca in the history of the use of Hoasca.

They are people very qualified to be international references in debates which involve the use of the Hoasca tea. This is yet another challenge that Mestre Gabriel puts to us.

*Teodoro Irigaray is part of the Council of General Administration (CONAGE) and President of the Association New Enchantment of Ecological Development.

Bacurau, one of the pioneers of União do Vegetal 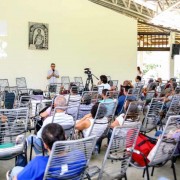