The second episode of the On the Path of Peace web series brings an interview with Cosmo Lima de Souza, Acre State Attorney and member of the Centro Rainha da Floresta – Casa de Juramidã (Queen of the Forest Center – House of Juramidã), which utilizes Ayahuasca as a sacrament, and whose religious works follow the precepts established by Mestre Irineu (Raimundo Irineu Serra).  Cosmo has meaningful involvement with the Chamber of Ayahuasca Cultures in Rio Branco (AC), and was the spokesperson for the Multidisciplinary Working Group – GMT/Ayahuasca in 2006, whose report led to Resolution No.1 of the National Council on Drug Policy (Conad) in 2010, regarding the norms and procedures necessary for the religious use of Ayahuasca along with the deontological (ethical and moral) principles.

Among the events scheduled to mark the 60th anniversary of the Beneficent Spiritist Center União do Vegetal this upcoming July 22nd, is the broadcast of the web series No Caminho da Paz (On the Path of Peace), by the UDV Blog channel. It includes of series of interviews with civil and religious authorities as well as friends of the União do Vegetal, who pay homage and recognition to the work carried out by our institution in the name of peace and reconciliation. 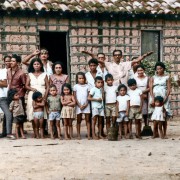 UDV: a milestone for progress and equilibrium for humanity for the past 60 ...
Scroll to top