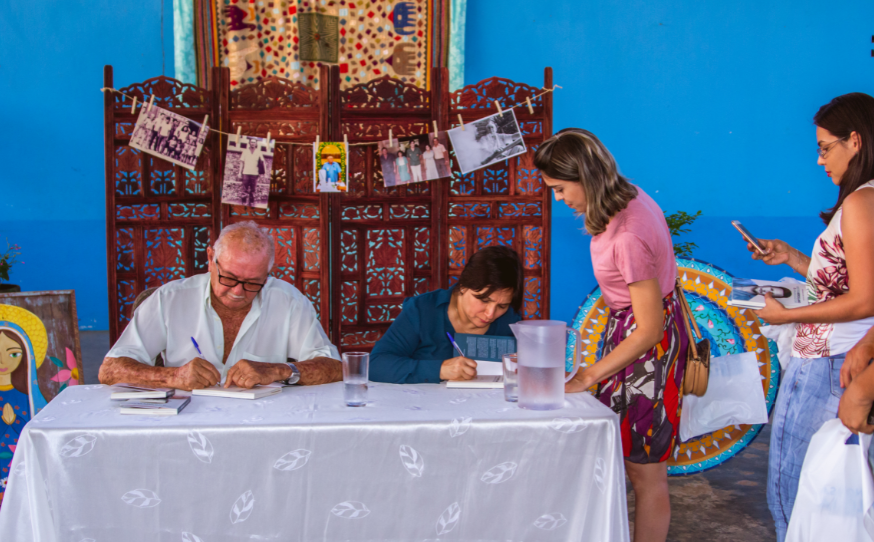 Held on the 24th of November, at Núcleo Mestre Gabriel, the historical headquarters of the União do Vegetal, in Porto Velho (Rondônia), the launch of the biography of Mestre Herculano de Oliveira brought together many friends and associates of the UDV. The event included the presence of the biography subject, who spoke about his life and held a book signing.

Titled, “Mestre Herculano, o Amansador” (“Mestre Herculano, the Tamer”), the book tells the story of this gentleman who, on July 22nd, 1971, received the degree of Mestre from the hands of Mestre Gabriel, founder of the UDV, and who also gave him the title of “Horse Tamer”.

Written by Isabel de Oliveira Cavalcante and Pedro Rogério, with the special collaboration of José Roberto Campos de Souza, the book talks about his origin in the northeastern part of Brazil, his arrival to Rondônia, his encounter with the Hoasca Tea and Mestre Gabriel and his trajectory inside the União do Vegetal. The book includes testimonials of other members of the UDV with respect to Mestre Herculano as well as texts from Mestre Herculano’s oratories in different contexts.

With language that is understandable, the book provides the reader with a comprehension of Mestre Herculano’s way of being, in addition to highlighting his doctrine about practice, moral integrity, character, good behavior and above all the art of living well. And, within this art of living well, his good humor and remarkable presence of spirit is revealed.

According to the author, Isabel Cavalcante, it is about a story told in great part by Mestre Herculano himself, maintain the originality of his simple and direct way of speaking, and it conducts the reader to know some of his characteristics as a hard-worker, a family man and also as an exemplary religious leader. “A record of great value that is intended not only for those who participate in the story today, but also for future generations”, she affirmed.

The book, Mestre Herculano, o Amansador, is already for sale on the Nossa Loja website: http://nossaloja.udv.com.br/.

The Position of the União do Vegetal in relation to politics and governmen...
Scroll to top