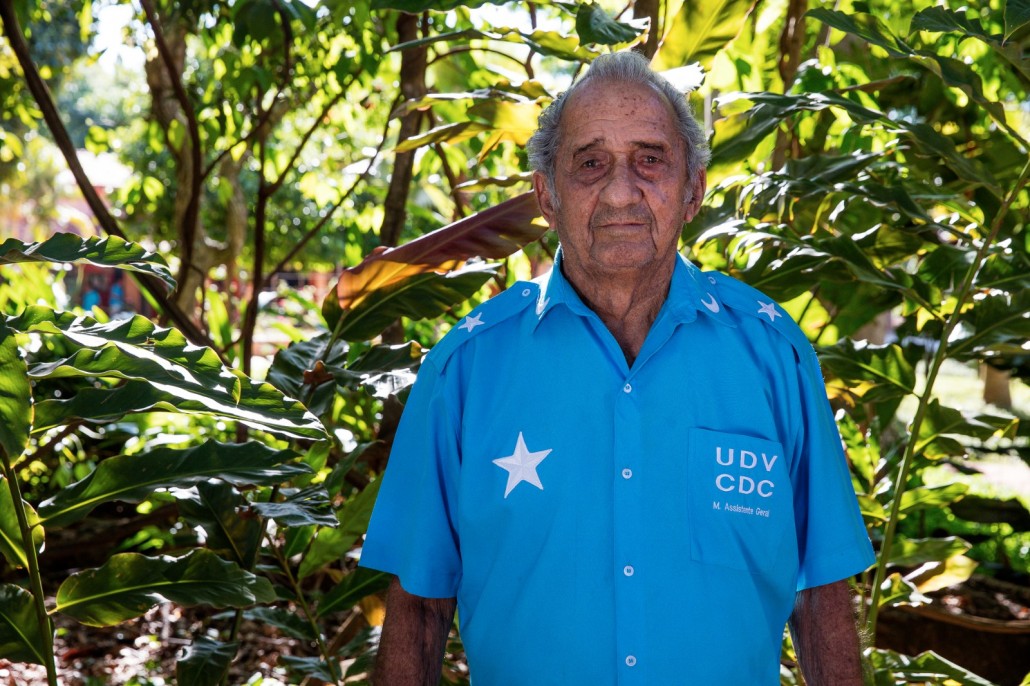 A filial love was born among us. “I do not know who adopted whom,” as he told one of the team doctors who attended him in Brasília-DF.

In these years that I attended him as a doctor, it’s been 10 years as of 2016, I can only say that he is obedient. Through his obedience, he managed to withstand more than a decade of diabetes, with good vision, good functioning of the kidneys, good circulation, a good heart. If at any time, he overworked his body (matter), it was by being obedient to the mission to serve this Sacred Work, our União do Vegetal. Who animates matter is spirit, and his matter reflected the power of his spirit, without fading.

It had been a while, maybe 2 years, that some signs announced an ailment and I searched several times, even with invasive, routine and more modern methods, some illness. Today I know it was his body struggling to stay in equilibrium.

He fought, as the commander he has always been, during 18 days in the hospital, teaching us to fight, to trust, to be firm, loving, patient, serene and obedient. Even those who met him there for the first time, recognized a different sort of man, a great man.

He surprised doctors who are not yet from the União do Vegetal, with his lucid consciousness, which always stayed clear despite anemia, lack of oxygen, infection, accumulation of toxins due to kidney failure and use of morphine. A body without a spirit of this degree would have been subject to disorientation as a first sign.

‘Seu Braga’ (sir Braga), our Mestre Braga, our dear friend did not revolt at any moment, did not complain, swallowed all the pills, did what was necessary and wished happiness to all who came to visit or care for him.

When I perceived that the size of the lung infection was growing exponentially and it was confirmed to be a fungus even though there was still no sign of shortness of breath, I felt a coldness in my spine, a tightness in my heart and I asked the Mestre to preserve his consciousness and that the suffering would be as little as possible.

During these years, we talked at times that his will was to be incarnate while his body was able to fulfill his mission, that he did not want tubes in his body and that if it were possible that he would have the freedom to disincarnate in his home. He could not be at home, but his home came to him and the presence of his family united could be felt.

He answered when asked: How are you feeling today, Seu Braga? “Judged, but happy! Happy for the family I have! ” “If anyone is not here, it is because they can not be.” “We are eternally linked.”

When I told him that he had acute leukemia, he said that he asked Mestre Gabriel to give him a few more days so that he could clear the air around and raise his spirit to the place that the Mestre had chosen for him. And so he did, with all certainty!

Five days before the passage, he began having shortness of breath and needed oxygen. We drank Vegetal in the 3 nights that preceded the passage. On January 16th, when the shortness of breath began to tighten he asked me: “Doctor which way will I go? Are you still hopeful? ” In command of his life, the next day he gave us, especially to his family and friends, a day of hope, a day that was worth living. “Because hope I will never lose.” Bath taken in the shower, he received friends sitting in the armchair, fed himself of his family’s love and a soup of beneficence made by his eternal beloved. He said goodbye to her that afternoon with one “until tomorrow.”

On the night of January 17th the lack of air could no longer be controlled. That night we stayed with him, me and Mestre Rossano. Mestre Braga and I already knew. He said “A son of God.” I called Rossano and explained that it was time for the passage.

As I always did, I explained to Mestre Braga that to give him more comfort after we drank Vegetal we would give him medicine so that he would sleep and not feel so much discomfort, that it would not interfere in the time of disincarnation but it was to give comfort. I waited for his consent. Even with my small size, he said he would firm his thought in his place in the Universe.

We communed with the Vegetal one more time. Mestre Rossano conducted this moment, elevating our burracheira and calling the Light of Hoasca. I thank Mestre Gabriel for bringing Peace to this Sublime moment. He slept tranquilly, and the moment approached with serenity.

Mestre Braga awaited, full of vitality from family in the morning, who took care of his body, shaved him, bathed, massaged him in a show of deep affection. Then, and only then, in charge of everything and skillfully dribbling the ball beyond everyone, he simply flew.

We will always miss him, as he did our Mestre Gabriel. I am grateful for the grace and opportunity of meeting this great gentleman. Mestre Braga, my obedient patient. I love you and I will always be ready to serve you.

*Valéria Valim is a General Practice Physician and Rheumatologist and took direct care of the health of Mestre Braga during a period of 10 years. Valéria Valim is also a member of the Body of the Council of Núcleo Divino Espírito Santo, in Santa Leopoldina – ES.

Music as an instrument of Mestre Gabriel
Scroll to top